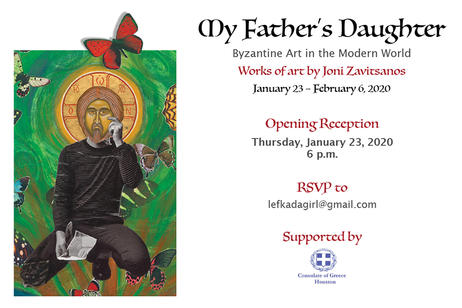 Byzantine Art in the Modern World

‘My Father’s Daughter: Byzantine Art in the Modern World’ is a special exhibition for Joni Zavitsanos, as it chronicles the work of her father’s (Diamantis John Cassis 1936 - 2015) side by side with her own. Her father was on a quest to discover and create meaningful, edifying art. He used the principles of Byzantine iconography, a structured art form copied and used to depict biblical themes in Orthodox churches, to create both ancient and modern imagery that continues to speak to audiences in a unique and didactic way.

Zavitsanos has followed in her father's footsteps, recreating the ancient imagery of the Byzantine era, to give a modern statement for today’s society. Both of them strive to answer the question, “Can modern art be edifying”, and “How would that look?” END_OF_DOCUMENT_TOKEN_TO_BE_REPLACED