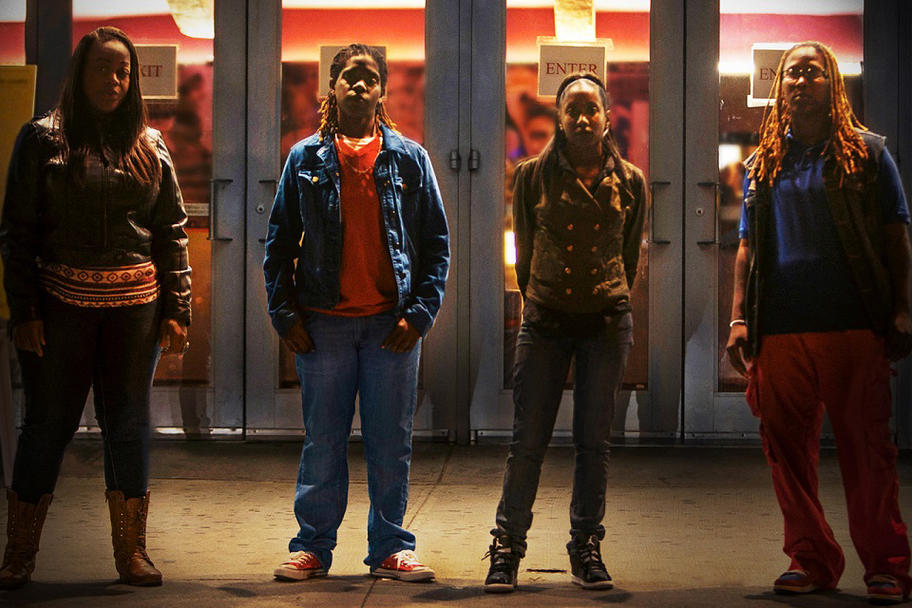 Out in the Night

In partnership with the Pilot Dance Project's Hawa (The Ride)

Out in the Night is a documentary that tells the story of a group of young friends, African-American lesbians who are out, one hot August night in 2006, in the gay-friendly neighborhood of New York City.

They are all in their late teens and early twenties and come from a low-income neighborhood in Newark, New Jersey. Two of the women are the focus - gender non-conforming Renata Hill, a single mother with a soft heart and keen sense of humor, and petite femme Patreese Johnson, a shy and tender poet.

As they and their friends walk under the hot neon lights of tattoo parlors in the West Village, an older man sexually and violently confronts them. He says to Patreese, "let me get some of that" as he points below her waist. When she says that they are gay, the man becomes violent and threatens to "fuck them straight". He spits and throws a lit cigarette. Renata and Venice defend the group and a fight begins, captured by security cameras nearby. The man yanks out hair from Venice's head and chokes Renata. Then, Patreese pulls a knife from her purse and swings at him. Strangers jump in to defend the women and the fight escalates. As the fight comes to an end, all get up and walk away.

But 911 has been called and the man involved has been stabbed. Police swarm to the scene as their radios blast out warning of a gang attack. The women are rounded up and charged with gang assault, assault and attempted murder. Three of the women plead guilty. But Renata, Patreese, Venice and friend Terrain claim their innocence. They are called a "Gang of Killer Lesbians" by the media. In activist circles, they become known as The New Jersey 4.

Director and Producer, blair dorosh-walther identifies as gender non-conforming and uses both male and female pronouns, is a social issue documentary director, experienced production designer, and artist with a passion for inspiring action for social justice through media. blair graduated with a BFA in Film from NYU and was awarded the Adam Balsano Award for social significance in documentary filmmaking. Out in the Night had its international premiere at the Los Angeles Film Festival June 2014 and has since been in over 90 film festivals. It was awarded the Joyce Warshow Fund from Astraea Lesbian Foundation for Justice, a Special Jury Prize for Courage in Storytelling and Best Documentary - Audience Award from ImageOut Rochester, the Jury Award and Audience Award at the Seattle Lesbian and Gay Film festival, Favorite Documentary at ReelQ Pittsburgh International LGBT Film Festival, the Jury Award at the ARC Queer People of Color Film Festival, the Audience Award for Documentary Feature at the New Orleans Film Festival, the Audience Award and Jury Award for Best Documentary at ImageNation Montreal LGBT Festival and the Audience Award from the Baltimore International Black Film Festival. We have also partnered with the United Nations Free and Equal Campaign to decriminalize homosexuality worldwide. Out in the Night is her first feature documentary.

This free screening of Out in the Night is made possible by a City's Initiative grant from the City of Houston through the Houston Arts Alliance in support of the Pilot Dance Project's Hawa (The Ride).