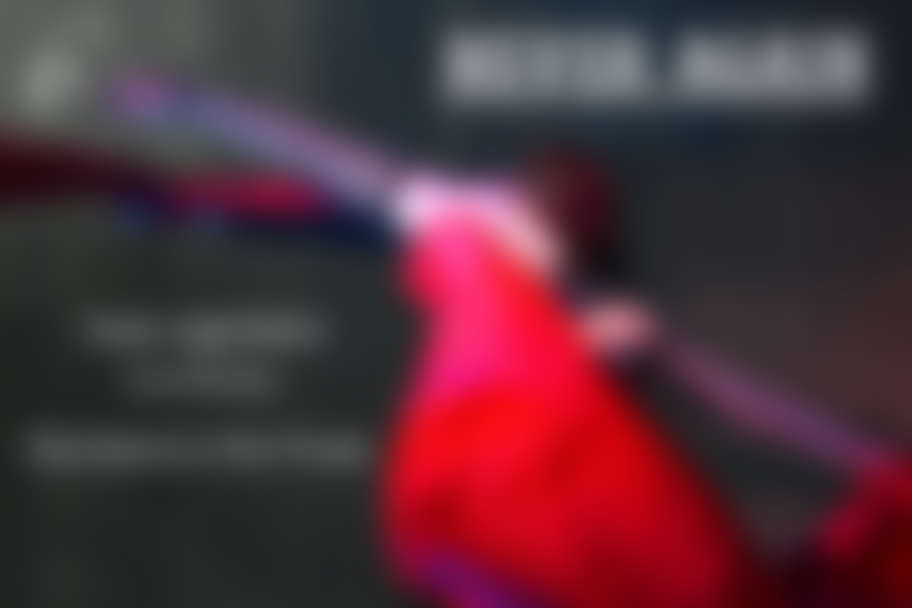 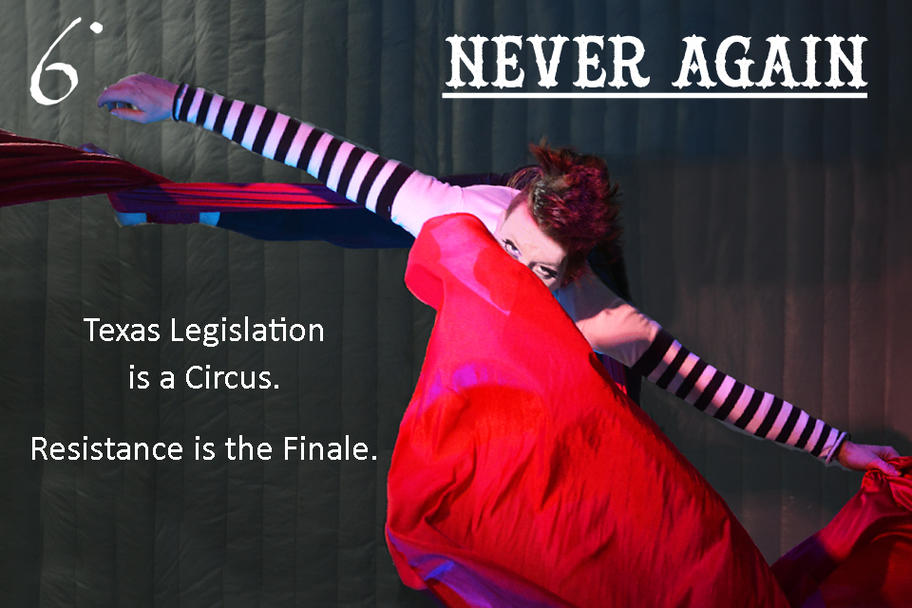 Warning: This shows uses burlesque elements and gun shots, and may not be suitable for children.

When Texas Legislation fights for
a hanger to be the only option, diversity to be a dirty word
race to be a weapon, sexuality to be crime
What is the price for Texas?

The Texas Legislation is a Circus.  Resistance is the Finale.

The collision of Politics and Art gives rise to a dystopian circus arena. Politicians are clowns, the Resistance is Burlesque, and minorities are flying aerialists and vaudevillian acts.  Welcome to the world of Never Again under the Big Top.

Produced and choreographed by Toni Leago Valle, Never Again is an art commentary on the current political landscape in the Lone Star State.  It emphasizes one point; that Texas Legislation has become increasingly hostile towards its diverse citizens - women, minorities, LGBTQ, and children.

Performed by a stellar cast, dancers portray the key players who orchestrate Texas politics  - Greg Abbott, Dan Patrick, Ted Cruz - and the Legislation as their puppets.  Pro-Choice Abortion advocates appear as Burlesque performers. Aerialists Davis Stumberg and Carlos Perez wind themselves up and climb as a symbol of the uphill battle for LGTBQ equality. Lia Madrazo delivers a touching solo as a woman who lives in the shadows in fear of being labeled an “Angry Black Woman.”  Kate Rash and Carlos Perez dance two sides of the #MeToo coin. Tyler Scarberry cracks a whip as a mass shooter. Guest Aerialist Sean Lane pays tribute to the immigrant children being detained in Texas' own backyard. Other performers include Ruby Leal, Kylie McIntyre, Mary Catherine McReynolds, Ariel Montemayor, and Michelle Reyes, with Lighting Design by Hudson Davis.

Costume Design by Judy Masliyah, owner of My Flaming Heart. A graduate from the Fashion Institute of Technology in New York City, Masliyah established apparel companies in New York, California, and Texas. She also has designed and built for music videos, film, theater and opera. Her original fabric designs encompass incongruent genres, adding a somewhat disturbing tone to otherwise classic and nostalgic styles. Her most recent fabrics have become more political in nature. Her controversial 'Anti Nazi Coat' was made as a response to Charlottesville and her 'Keep Your Tiny Hands Off My Rights Dress' was taken from a sign in the Houston Women's March. Both controversial designs have already gained attention on social media from friend and foe alike.

The History of Never Again

Never Again started out as a Women's Reproductive Rights concept in 2014.  Valle, a feminist and activist, has been watching Women's Rights eroding for years under constrictive abortion laws.  She started researching Texas politics and history. “The most sacred decision a woman can make - whether or not to have a baby -is being stolen right out from under them because they do not know how Texas Legislation works. It is all done hush-hush under the table. In 2017 alone, 75 bills were proposed to regulate Women's bodies and behavior.  You know how many for men?  Zero,” states Valle, “I wanted to bring my research to the general public, but I did not want to do an angry, dark depressing concert.  Instead, I followed the example of the Women's March pussycat hats; I started tackling this angry, dark depressing material with humor; through vaudeville and circus entertainment.”

Since 2017, Never Again has broadened in scope to include recent political upheavals.  It reveals the 2017 proposed bills and laws against abortion, Planned Parenthood, Roe vs Wade, and ultimately for fetus personhood. It shows the relentless crusade against LGBTQ citizens, the deliberate silencing of its black and brown communities, and, most recently, the national spotlights on a mass shooting and separation of immigrant children, all right in Texas' backyard. Never Again highlights the Leaders of the Resistance: the Houston Women's March, Black Lives Matter, the Austin Handmaid's Tale protestors, the #MeToo, #NeverAgain, and #FamiliesBelongTogether movements; all Women and Men who have found their voices through anger and dark wit as opposition to the government. Valle notes, “With every protest, I realized it is not just women being oppressed.  We are all under attack from many angles.  It is a Human Fight for the right to live freely without an oppressive government.”

Never Again ultimately points its audiences to vote in November.  It hopes to attract people to come for the entertainment, but who leave with more information on how the current political system is actively working against their best interest. Valle comments, “I hope to facilitate change in our actions. Collectively, we can act through voting so that we can remain first-class citizens, humans treated with respect, and retain the ability to make individual choices for ourselves.”

This program is part of the Tales of Houston Women Collaboration, a 2-month retrospective and celebration by several of our community's organizations displaying the many ways Houston's women have, are, and will put their mark on history. We are celebrating through art, lectures, movies, dance, and more! Join the fun and learn more at http://www.houstonhistoryalliance.org

Never Again is made possible through a grant from the generous support of an Anonymous funder and sponsorship from the National Organization for Women.  Never Again is supported in part by Dance Source Houston's Production Grant program.

Student price tickets are available for the Saturday 5 PM performance and both Sunday performances.